The Mobile Industry Will Shift

The growth of mobile phone access worldwide has attracted lots of  enthusiasm in part because of its potential to generate new social and economic benefits. In this post, Mark Selby suggests new directions and critical points that the mobile industry may face, based on historical developments in the sector.

The seemingly inexorable growth of mobile phone use continues apace.  Upgrades from feature phones to smartphones, shorter phone replacement cycles and use of dual-sim phones are all generating statistics that testify to remarkable growth. In addition, the use of sim cards for machine-to-machine applications is causing some observers to mistakenly wonder at the number of mobile phones in use exceeding the planet’s population. The historic growth of mobile phone use has been remarkable.  The economic and social benefits derived from the technology have been extraordinary.

I sense the mobile industry is approaching a major shift that will have considerable economic impact.  It could be a Black Swan moment for some industry players.  Pointers 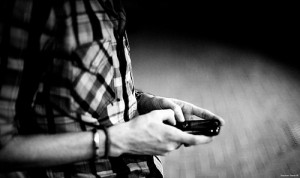 to the shift’s approach include potential changes in consumer demand, the homogeneity of offerings, regulatory change and the current structure of the industry. In 1993, Nokia introduced the “Connecting People” strapline.  At first it neatly encapsulated the ability to call someone at any time without the need for the caller or recipient to be close to a landline (assuming both were within mobile coverage).  Today we see increasing evidence that while connecting remote people, the mobile device is also disconnecting users from those around them.   The benefits of communicating with distant family, friends and colleagues are immense but the negative impact on face-to-face communications is growing.

For years we’ve observed people staring at their mobiles, almost willing a message to appear on the screen.  The sound of incoming messages was seen by some as a demonstration of their popularity or importance to their peers.  Today we see people keeping their headsets on, despite not listening to anything on the device, let alone a voice call, as a signal to others that they don’t want to be approached, interrupted or spoken to.  Whilst concentration on a specific task might necessitate this on occasion, it’s unlikely to be required all the time.

Messaging with remote contacts, on a one-to-one or a collective basis is less demanding and easier for some than engaging in person.  Yet the value of physical interaction to nurturing virtual communications and strengthening personal relationships is well known.

A research project undertaken by Nokia in 2009 demonstrated the value of mobile applications that enabled or supported face-to-face interactions by users.  The research was largely ignored internally.

Will the anticipated mobile market shift occur because people are demanding technology or solutions that enhance face-to-face communication?  No.  There’s little evidence of an explicit demand for them.  But we cannot assume that explicit and implicit demands are one and the same.  If technology or solutions emerge that genuinely enable, support or enhance close proximity communications the demand could be immense and dramatically impact the growth trajectory of current mobile technology.

Is Google Glass such a change technology?  Given the wearing of audio headsets to distance the wearer from those in close proximity, the wearing of these glasses is likely to create an even more effective barrier, quite apart from the associated privacy concerns.  At this point in time it seems unlikely that Google Glass alone will trigger the market shift although it does address another potential cause – the form factor.

Historically, mobile devices were available in many form factors, with alphanumeric keypads or touch user interfaces.  Personalization of the devices, using covers or ring-tones, enabled conspicuous consumption when desired or ease of identification in congested environments.  Even today, the sight of attendees at conferences all reaching for their devices in unison when a mobile rings or beeps is comical.

The homogeneity of current mobile devices, especially smart phones, is remarkable.  It could be argued that the common form-factor is the time-tested, ideal design for mobile phones.  Much like the long-term design of the bicycle.

New materials are being developed and tested that could address this homogeneity.  They include compact, folding screen devices that might obviate the need to carry both a phone and a tablet or conversely, encourage device modularity.  Such a change in form factor will appeal not only to early technology adopters but also the many who aspire to conspicuous consumption or seek individuality.

If North American or Chinese consumers embrace these new devices the global market is likely to follow (North America due to the international impact of its media and China because of scale of demand and supply).  Will these devices cause a market shift or simply movement along the growth curve?  Potentially, they will not be dependent on the current mobile networks nor the operators that build and own them.  In which case we can expect a shift.

Just as the incomes derived from SMS text messaging have been decimated by IM services and mobile voice traffic has declined due to VOIP applications, now data revenues could be at risk with the forthcoming availability of open, unlicensed spectrum and the emergence of Wireless Personal Area Network technologies.

Most countries have a limited number of mobile network operators due to local regulatory and licensing policies.  It has resulted in a level of market control, deemed acceptable for competitive service offerings and for maximizing national spectrum asset value.  Unlicensed spectrum and WPAN open the door to new entrants, unhindered by the cost and regulatory constraints of current mobile operator incumbents.

A more acute market concentration has developed in the mobile device industry. Canaccord Genuity estimated that in Q4 2012, Apple took 72% and Samsung took 29% of total profits in the mobile phone market.  Other suppliers, including Nokia, RIM, LG and HTC either broke even or lost money.

All credit to Apple and Samsung on their success.  Such financial strength gives the two companies an extraordinary opportunity to control the market, cause further havoc amongst their competitors and contribute to the major shift by taking the industry in a fundamentally new direction. Conversely, the control of the few has historically enabled new entrants to create fundamentally different innovations, unhindered by historic ways of working or cognitive frames.  The time is ripe for such innovation.

While forecasting a major mobile industry shift might seem a bearish, doom-laden outlook the future in fact is exciting.  Significant innovation, economic and social value will be created.  Those at risk are incumbent market players following inappropriate, rear-view mirror strategies, seeking regulatory protection from new entrants.

The future is bright (and different).

This article gives the views of the author, and not the position of LSE Network Economy Blog nor of the London School of Economics.

Mark Selby is Visiting Professor at the University of Surrey and a London School of Economics’ Network Economy Forum member. He lectures globally and serves on boards, including the British Screen Advisory Council. Mark has over 30 years of senior executive experience in Technology, Media and Telecoms, working at the epicentre of multiple technology and business innovations and shifts. His passion is the growth of economic and social value. Former senior roles at Nokia included global responsibility for new technology and service ecosystems, as well as sustainability and privacy initiatives. Earlier roles include President of Solid Information Technology, Co-Founder and Executive Director of Health On the Net Foundation, President Internet Society, Geneva, radio producer and presenter, board member of Linux International and senior executive roles at Digital Equipment Corp. and Xerox.